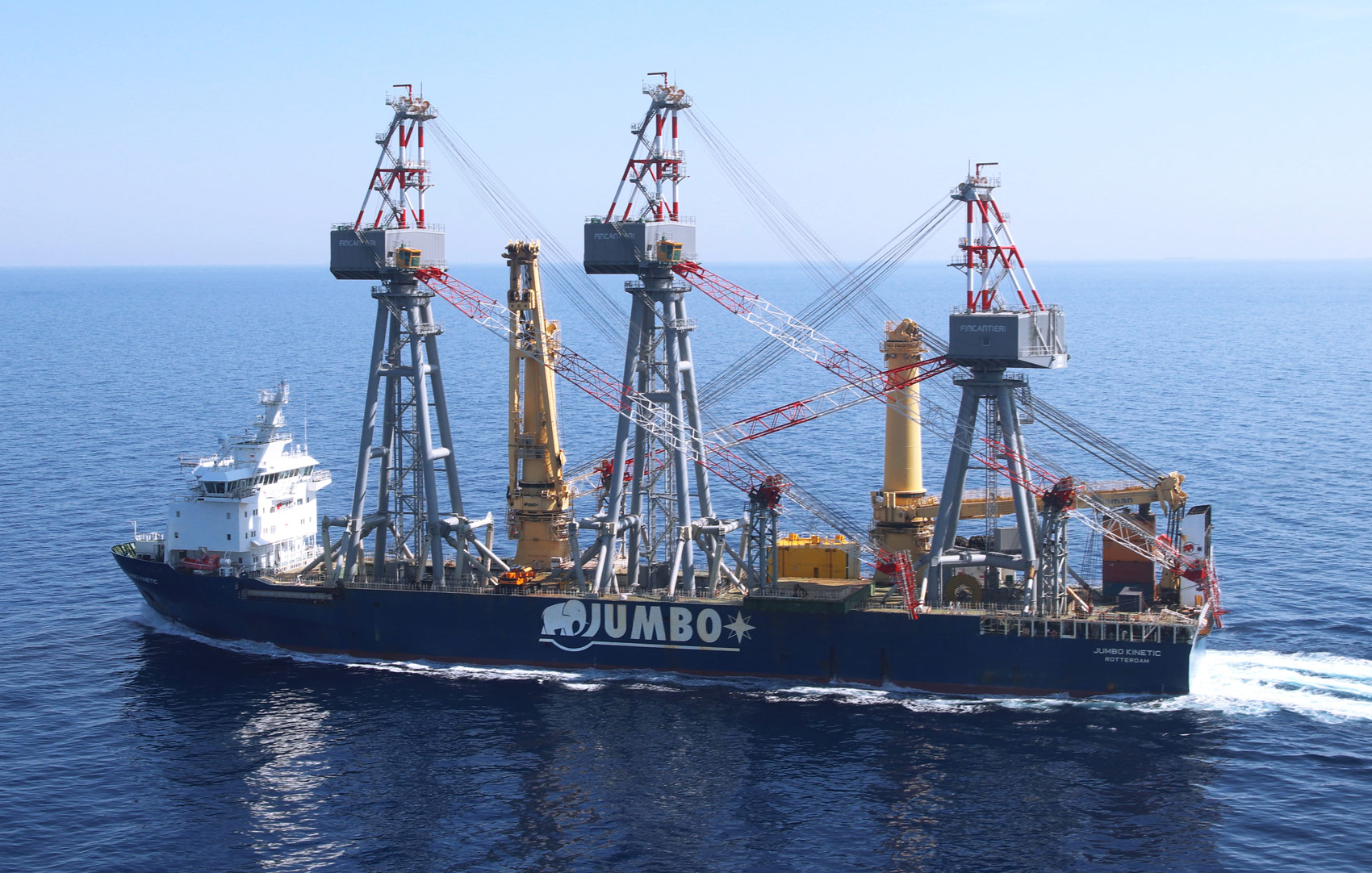 The height of engineering excellence
The most notable aspect of this voyage becomes clear as soon as you look at the video and photo’s: these shipyards cranes were fully erected. The alternative was to transport them in pieces (pedestal, crane house and boom) and then erect them at their destinations. However, considering the overall project costs, the client preferred the cost-effective, specialised and safe transport solution from Jumbo.

The challenge of transporting shipyard cranes like this is that they are not only tall; they are also extremely narrow and have a small footprint. This means that, compared to other types of cranes, their centre of gravity is relatively high. The highest two cranes, for instance, were 137 metres high during loading (with boom raised fully) and 81 metres high during transport.

Increasing stability
The team engineered this shipping solution in less than 3 months. “These cranes were particularly narrow; one of them was only 9 metres wide at its base. Therefore, stability of the cranes was critical during the lift. We added 100 tonnes of ballast to the base of one of the cranes to increase stability during the lift and the voyage,” says Jumbo Senior Project Engineer Otto Savenije, whose job focuses on the lifting and stability calculations, seafastening and engineering of the project.

The Jumbo Kinetic, only one of three vessels in the world capable of this project, loaded the cargo with its own deck cranes – each lift as a dual-lift – into its cargo hold. “We lifted the first and second cranes one by one to the middle of the ship, driving them aft and forward on temporary rails that we built at two different heights. The third crane stayed in the middle of the ship,” explains Otto.

A close eye on the weather
With its cargo safely loaded, the Jumbo Kinetic departed Qingdao, China on 10 February 2021. The dimensions of the cargo impacted the route options for Jumbo’s Vessel Manager Jeroen Herders. “The cranes were too high to pass under the Mubarak Bridge in the Suez Canal. So, we had to go round the Cape [of Good Hope], have a bunker stop in Durban, and then going up the west coast of Africa to the Mediterranean.”

To guarantee that the maximum allowed acceleration forces on the cargo where not exceeded throughout the entire voyage, the Jumbo Kinetic sailed with a maximum wave height restriction of 5.4 metres. Anything higher than that, the vessel had to slow down. “But as it happened, the ship had favourable weather en route, resulting in a smooth passage around the Cape and no delays during the transit.” 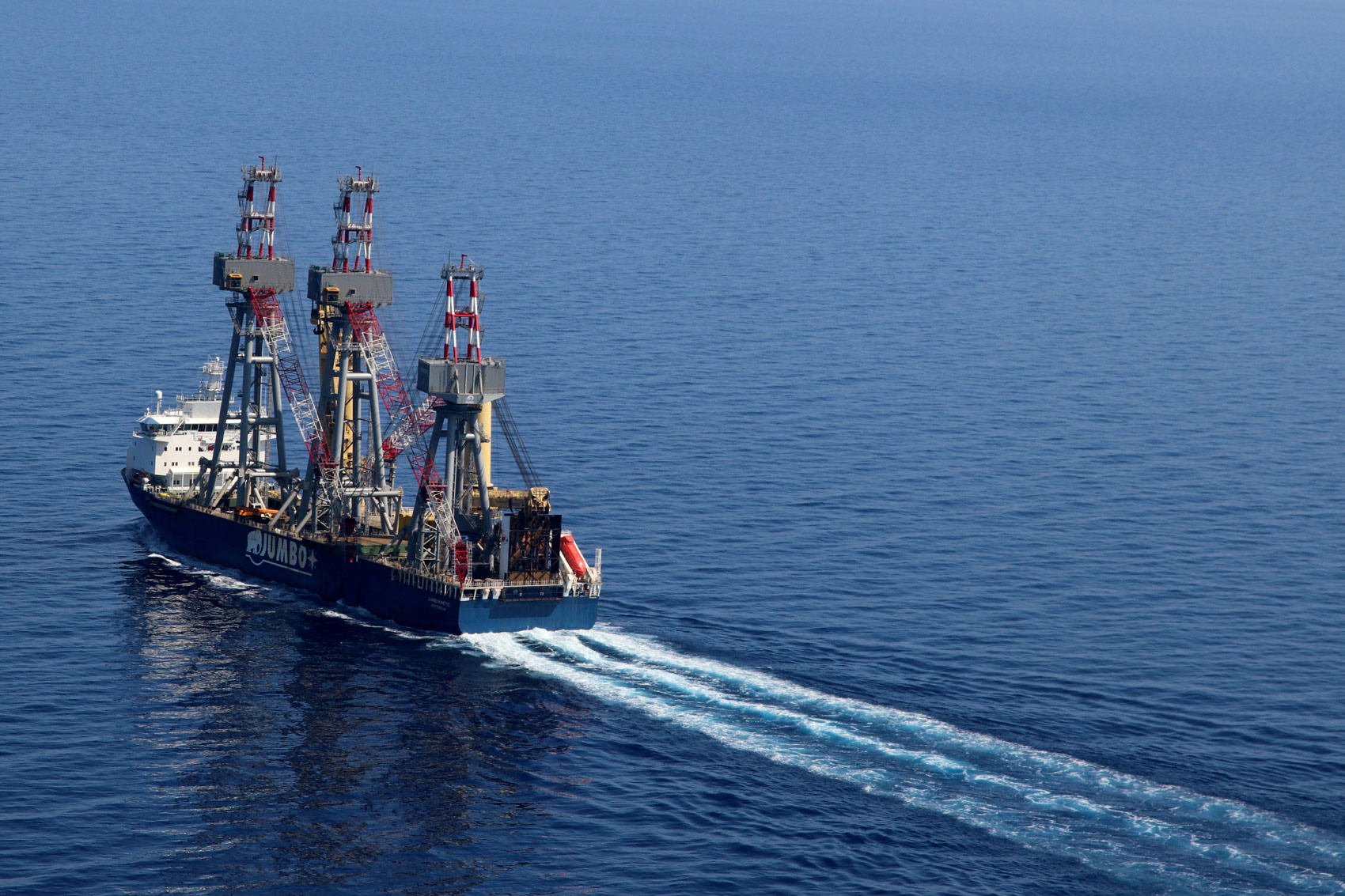 Spider in the web
Jeroen’s role continued on arrival at the three ports of call in Italy: Trieste on 1 April, Sestri on 18 April, and La Spezia on 26 April. He describes his function as being the “spider in the web”. This means that in addition to making sure that everything on the ship is working well, monitoring the voyage and organising bunker stops, he also coordinates contact with the offloading ports. “This includes communicating with the agencies, the stevedores, the terminals and the client. At the end of the day, though, this is a team effort on the part of the Jumbo Kinetic’s crew, our engineers, and the Port Captains – Mike Ma in Qingdao and Andrea Chitto in the Italian ports – they did the real work!”

No project is completed successfully without great communication and a cooperative spirit from all involved, and these factors were key to engineering the lifts and designing the seafastening approach for this project.

With the completion of this complex highly-engineered shipping solution, another heavy transport challenge awaits the dependable Jumbo-SAL-Alliance team. It’s time to engineer the next shipping solution!