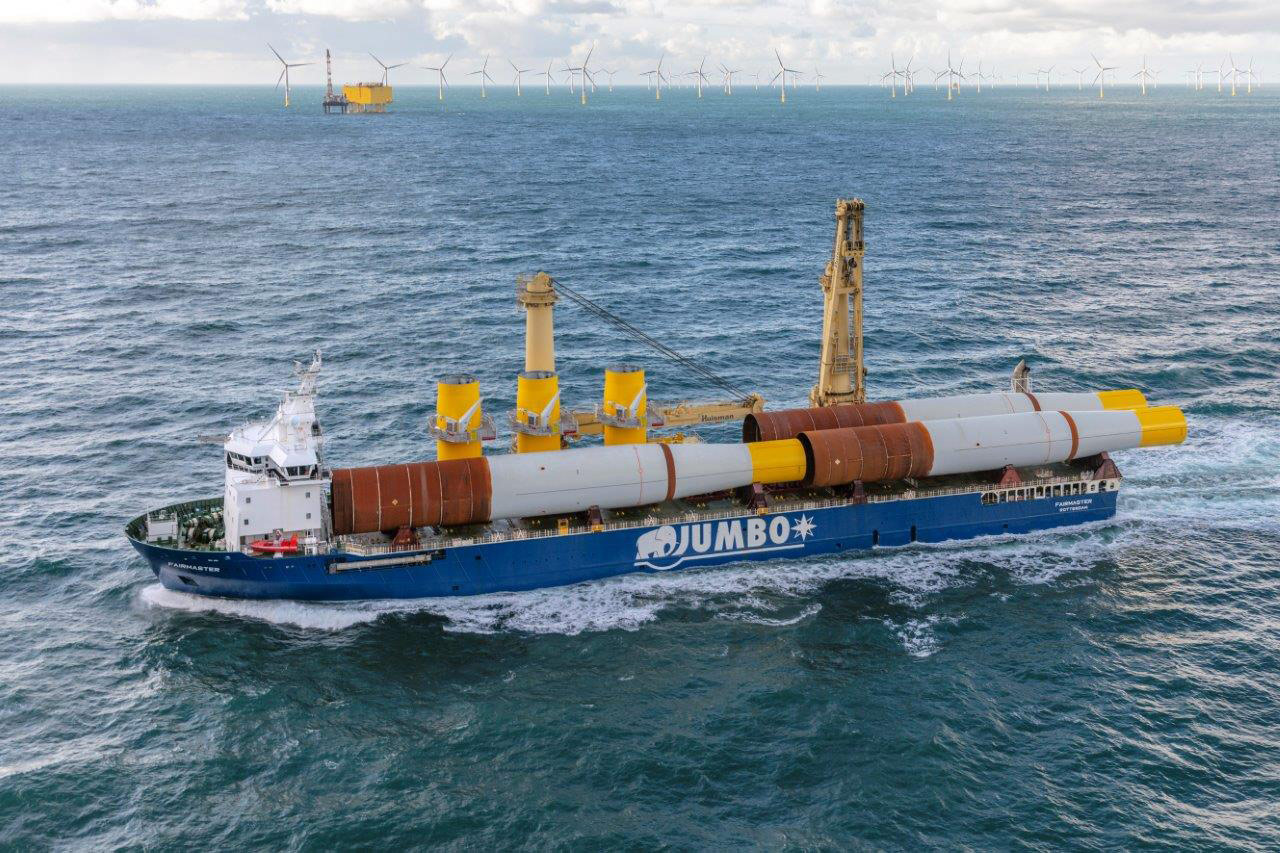 There is no such thing as a standard job in the heavy lift and project transport industry. Every contract and every client is unique – and this requires maritime service providers like Jumbo-SAL-Alliance to deliver versatility and flexibility at every turn.

Jumbo’s monopile and transition piece transport for DEME Offshore is great example of such a project. The flexibility being provided by the heavy lift vessel Fairmaster, and the versatility coming from Jumbo’s vessel crews and onshore engineers who planned and executed the project with a true ‘total solution’ mindset.

Biggest job to date
Take a quick look at the specs of this project and you would be forgiven for thinking that this was a straightforward ‘back and forth’ vessel charter contract. After all, the scope involved 37 voyages from Rostock, Germany and Aalborg, Denmark to Eemshaven, the Netherlands in under a year.

However, upon closer inspection, it is clear that Jumbo’s work for DEME Offshore for Ørsted’s Hornsea Two offshore wind farm was by no means straightforward. For a start, the sheer number of offshore wind farm components was large: totalling 141 monopiles (MPs) and 131 transition pieces (TPs). All these needed to be loaded, transported, and unloaded.

Next up, the dimensions of the components were substantial (considering the fact that wind turbine generators – WTGs – are getting bigger and bigger, it is only logical that their foundations need to increase in size too). Furthermore, the MPs and TPs were of various sizes; the TPs all had a 6.5-metre diameter and weighed 345 tonnes, but the MPs ranged from 8.3 metres to 9.5 metres in diameter and from 775 to 1,285 tonnes.

Smart supply chain link
This diversity of cargoes meant that Jumbo had to bring in the right vessel for the job. Its K-3000 class heavy lift vessel Fairmaster fit the bill perfectly. This 152.9 metre-long heavy lift vessel, with two 1,500-tonne cranes, provided a flexible deck layout that enabled compliance with the project’s schedules.

The Fairmaster’s flexibility allowed Jumbo’s engineering teams to devise three different loading configurations: five MPs loaded on deck and in the hold, six TPs and three MPs, or three TPs and four MPs. This in turn yielded benefits higher up the project’s supply chain: Jumbo could adjust to its client’s sailing sequence, which was linked to the delivery sequence from its fabrication yards.

Maxing the carrying capacity
In a multi-voyage project like this, efficiency is key. You could say that the aim of the game is to carry the most equipment within the least amount of time. To this end, Jumbo used the planning phase to design and engineer MP saddles and TP grillages that utilised the Fairmaster’s carrying capacity to the max. Using inlays in the saddles to accommodate the different diameters of the MPs, the resulting clearances between components were tight: sometimes 50cm or less.

To speed up loading and unloading operations, Jumbo installed project-specific lifting lugs onto the Fairmaster’s deck hatches. This relatively simple, yet smart and well-timed, idea is an example of what Jumbo calls its ‘value engineering proposals’ that are presented to clients to optimise operations.

Biofuel initiative
Responding to Ørsted’s goal of decreasing the environmental footprint of the construction on the Hornsea Two wind farm, Jumbo included a Green Initiative into its project execution. This was to sail with Bio-Fuel Oil from sustainable marine biofuel provider GoodFuels, delivering an expected 80-90% CO2 reduction versus fossil equivalents, and zero sulphur oxide (SOx) emissions.

Every lift a heavy lift
The Hornsea Two project is notable for Jumbo in that it was the largest number of MPs and TPs that it has ever shipped in a single contract. Because of the repetitive nature of the job, the company paid special attention to maintaining a clear focus on safety throughout the project. Jumbo’s vessel crews treated every lift as a heavy lift with a high focus on bringing these major cargoes safely on board. In fact, Jumbo brought in an external safety consultant to investigate and prevent complacency on board.

Jumbo’s ‘best-for-project’ focus during the project planning and execution optimised every part of this extensive transport scope. “Our flexible engineering on this project is one of the things we’re most proud of – it helped us conclude the project scope within just 37 voyages in a period of just under twelve months,” concludes Jumbo’s project manager Maarten De Gruyter.