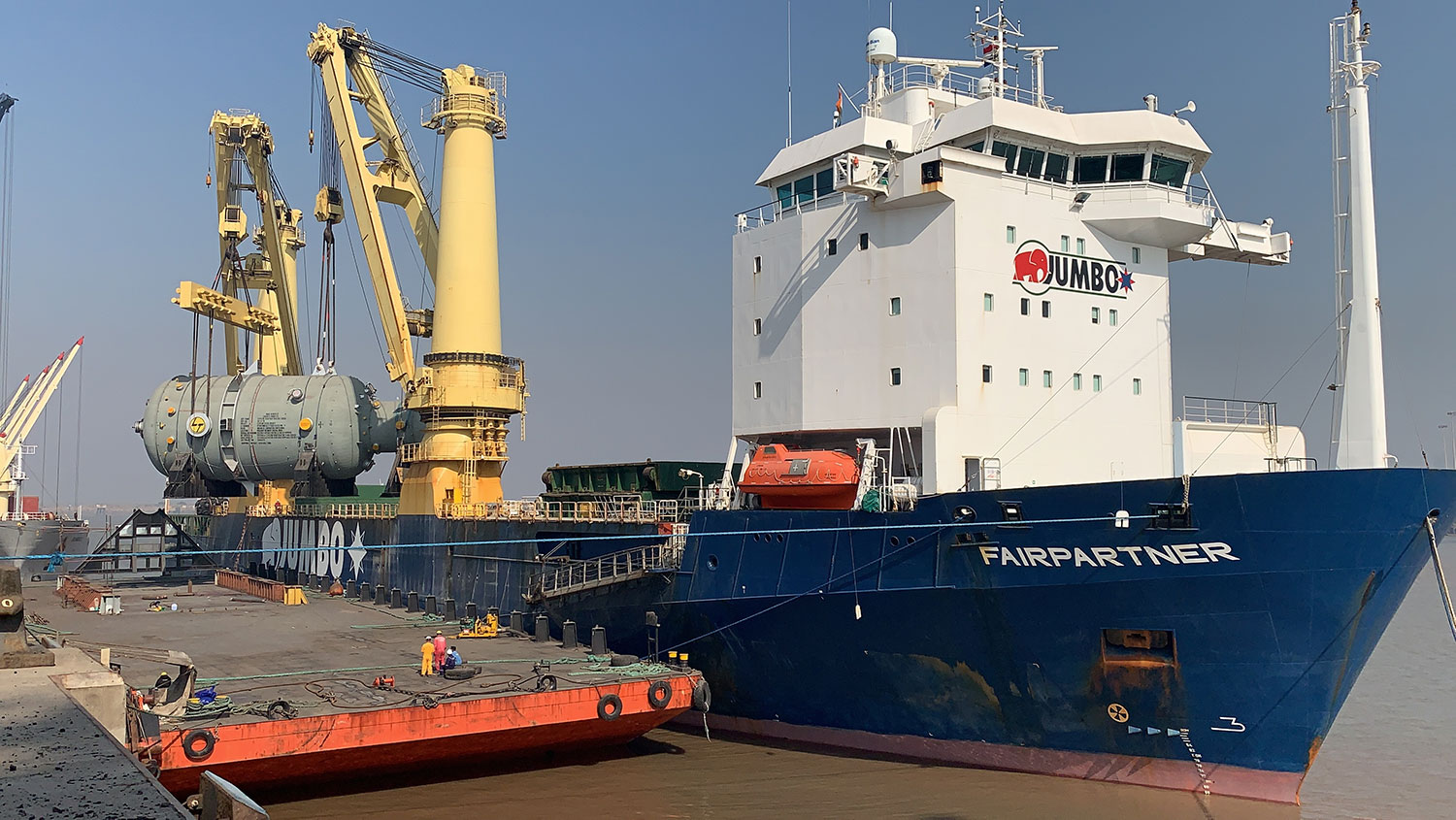 One of our 9 heavy lift vessels, Fairpartner, was recently tasked to sail from the west to the east coast of India travelling almost 2600 nautical miles with three separate cargoes onboard, calling at five ports, all in 29 days. This is the longest time a Jumbo vessel has stayed in Indian waters and performed a complete coastal voyage.

For this extensive trip, we combined three cargo loads of refinery, port and LNG equipment from three clients, Allcargo Logistics Ltd, Total Movements Ltd., and Global Golden Coast Private Ltd in one single voyage to the ports of Hazira, Paradip, Kakinada, Gopalpur and Dhamra. To adhere to the regulations, set by the Indian authorities when sailing coastal, a Special Voyage License (SVL) needed to be issued to us by the Indian authorities for each cargo/client.

The license was granted with a time limit of 29 days to cover the five ports from west to east India, so the crew had no time to lose. To complete the voyage in this timeframe, we had to stick to a tight schedule and planned operations needed to move like clockwork.

The first stop on our tour was in the busy and tidal Port of Hazira in Gujarat. With a lot of ship traffic in the area, the port authority sets limitations to the maximum width of the vessels and their pontoons. On this occasion, some cargo needed to be loaded from barges, which required the team to set up Jumbo’s stabiliser pontoon. Precision engineering and meticulous planning by the entire Jumbo team and their partners was essential to the overall planning being approved by the port. In the end, the port authorities allowed us to perform our loading operations as outlined without any disruption.

The first cargoes loaded in Hazira included a 1250mt EO reactor, a 1075mt wash tower and five other large pieces of heavy refinery equipment for the Indian Oil Corporation (IOCL) Paradip – MEG Project. The reactor was the heaviest piece of equipment ever to be transported to this refinery. It also proved challenging to load due to its short length and concentrated weight. The wash tower, which was also the longest (96m x 7,8m x 8,6m) piece of equipment this plant had ordered, the EO reactor, deethylenizer (715 tonnes), the steam drum (308 tonnes) and the re-condenser were loaded from three separate barges. The smaller pieces, a drying column, fifth effect evaporator and sixth effect evaporator were loaded from the quay side. Each item was safely stowed, some resting on saddles in the hold with the lengthier items being secured to the ship’s deck.

Joining the refinery items was a large piece of LNG plant equipment which the team also loaded onboard in Hazira Port that was destined for Dhamra Port, but first, our voyage takes us to the Paradip Terminal in State of Odisha.

At the congested port of Paradip, our client Allcargo secured a priority berth and all seven refinery equipment items for the MEG project were carefully discharged onto SPMT’s by the crew and the Fairpartner’s two 900t capacity cranes.

With unloading operations complete and the clock still ticking, the Fairpartner and crew motored on to Kakinada Port where two LHM550 cranes were waiting to be loaded at the quay. OSL, the owners of the fully assembled cranes, organised efficient berthing on arrival at the port and it did not take long before each crane weighing 357mt was loaded onto the weather deck and safely secured by the crew. The Fairpartner then set course for the next stop on the tour; the nearby Port of Gopalpur in Odisha where the cranes were discharged alongside the vessel.

“It was an extremely smooth and quality operation. We sincerely appreciate your efficient, gracious customer service, the level of detail and accountability you have demonstrated on the project, and the way you conduct business. Also, we would like to express our satisfaction and appreciation to you and the entire Jumbo team for your extraordinary support and teamwork. We must say your experience and knowledge of the crane movement was clear and differentiates between Jumbo and other companies.” Vipin Sharma, Golden Coast Global India Pvt. Ltd.

The final piece of the cargo puzzle which had been loaded in Hazira Port was a 133mt BOG Condenser which needed to be delivered to Dhamra Port close by. The reactor was safely discharged for our awaiting client and it was almost time to stop the clock.

“We are thankful to Jumbo for accommodating our BOG Condenser which was moved from Hazira Port to Dhamra Port by MV Fairpartner. The shipment was completed in a safe and professional manner despite challenges of congestion at the discharging port. We look forward to working with you on many more coastal and international voyages in the time to come.” Janesh Gulati, Managing Director, Total Movements.

This video made by our long-time preferred agent in India Wheel & Time/Gautamraj Sharma shows the detailed footage from loading to discharging in every port.

Wheel & Time, our commercial agents in India played a pivotal management role by closely coordinating with GAC India and various other agents at the five ports, with our three clients and their engineering and administrative teams, as well as with the various port authorities and permissions related to Indian cabotage laws.

“This was complex coordination at its best. To bring everyone concerned on the same page, the Jumbo team along with Wheel & Time shared and discussed the pre-port planning for every port and clarified responsibilities to keep operations safe, under control and flexible enough to make any necessary contingency arrangements.”  Martijn Huijgens, Vessel Manager, Jumbo.

Thanks to all the team and our partners involved in the successful completion of this high energy project in India. Special thanks to MV Fairpartner and crew, the Jumbo Shipping team, Wheel & Time, GAC India, CAF Marine, Larsen & Toubro, Godrej Boyce, Allcargo Logistics, Total Movements and Global Golden Coast, our appointed vessel agents at all five ports, and the Indian Port Authorities.

What Jumbo brings to these projects is the expertise of our operators and engineers. For this project, we worked closely with each of our clients to create a highly customised solution. The added complexity of multiple cargoes means that smart logistical planning, design and engineering are essential. We coordinated with our clients engineering teams to advise them of our lifting requirements, including position of the saddles, orientation of the equipment and stow plans on the barges. The Master and crew assisted our clients in making the correct arrangements in securing the saddles and their equipment.

The Fairpartner and her crew completed their coastal voyage and sailed out of Indian waters within the 29-day limit, making for three very satisfied customers. Another safe and reliable performance serving multiple clients in one trip!

Our Jumbo Kinetic also recently completed a successful loading in India and took care of the onward shipment of transformers and accessories for the Los Angeles Department of Water & Power, USA with our partners at Total Movements.